Kings are more famous for their royals’ emblems, signs of power and highness. Nevertheless, we hardly talk about the fatidic moment that from all every human beings birth tend towards: death. Far from brilliant, most of deaths are sordid. Between murders by poisoning or attacks and disease such as gangrene, where the smell from the royal dead body made collapsed more than one soul in the room present to pay their respects.

However, have we already talked about the gallows humor that had waited for more than one at the corner? In their highest greatness, Louis the IIIrd, Charles the VIIIth or even Henry the IInd were made fool of it.

Louis the IIIrd, the first one, suffered this fate. He was Charlemagne’s great-great grandson and defeated the very dangerous Vikings with his brother, Carloman, in 879 and then in 880. He became king of Neustria in March 880 when the Carolingian Empire was divided.

He had gotten everything to become a great and prestigious king but all came to an abrupt end at the age of 18 when he tried to seduce a young lady. “Seducing” is certainly fantasized when we know he was riding his horse after her while she was trying to reach her father to protect herself.

It was the most pitiful seduction in the History because in his race he ignored a door lintel and hit it so violently that he fell down stone dead.

Like him, one of his royal heir, Charles the VIIIth and last Valois in direct blood line, experimented the same fate. This time, no run after a “beggar” but he wanted to entertain his wife, Anne de Bretagne, who had just miscarried.

The 7th of April 1498, although he came to pick  his queen up to change her mind and have fun at the “Jeu de Paume”, in a Amboise castle’ s staircase, he hit a stone lintel on a door smaller than usual. Indeed, with a relatively small size, Charles didn’t realize that he should have hung his royal head.

A little bit disoriented but not knocked out, he continued his afternoon before collapsing stone as dead during the game. Everyone knows nothing is better than the bend of an arm to cure a concussion and a cranial fracture. The same night we were looking for an heir…

Henri the IInd preferred to find his salvation during a tournament celebrating the new peace after the Italian wars. Inspiring from Chevaliers novels, the Tournelles tournament was wonderful, excepted when the king insisted to joust in spite of Queen Catherine de Medici’s premonition.

In so doing, against the earl Gabriel de Montgomery the spears broke and one piece of wood came into one of the Henri’s eyes. Ambroise Paré, his famous surgeon, tried everything to save his king, exercising himself on fresh beheaded heads without any result.

Tournament and Portrait of Henri the IInd

Other stupid deaths happened a lot of course and just to hold up as an example: Lully, Louis the XIVth musician, dead cause of gangrene because while he was biting the rhythm with his stick he crashed it into his foot or, even, Antoine de Bourbon, Henri the IVth‘s grandfather, who died cause of an injury received while he was relieving his bladder during the siege of Rouen in 1562.

King, earl, duke or just anybody when it is time, it is time! Impossible to thwart the gallows humor…

King of Francs, Occidentale Francia from April 11th 879 to August 882.

His father’s heritage, Louid the IInd, was divided in March 880 in Amiens. Louis got the Neustrie (North of France including Paris), his brother Carloman got the West of Burgundy, Aquitaine and the Septimania.

They dealed with Louis the Young who claimed the Lotharingia (actual Germany) to fight the Vikings in 881 for the battle of Saucourt-en-Vineu. Landslide victory with more than 8000 dead ennemies.

Seventh and last Valois king from the Capetian dynasty.

He became king at 13 years old and was under the supervision of his sister, Anne de Beaujeu, until his majority.

His emblem was the moon crescent as it always been after him for the Orleans family (the youngest brother of France kings). Indeed, he was born as a second on the succession order and would have been an Orleans, but his older brother died in 1536 before their father, the king Francis the Ist. Therefore, Henri became Henri the Second in 1547.

Presentation photo: The tournament with Henri the IInd, German painting during the XVIth century © all rights reserved

Portrait of Louis the IIIrd @ Franky89

Tournament with Henri the IInd © all rights reserved 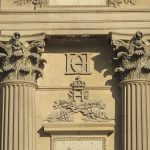