This month, we want to put forward the full-length portrait of King Henry the VIIIth Tudors the most famous king across the Manche Channel. Living inspiration for The Bluebeard story, this king is more famous for his love affaires than for his acts of government. This painting displays an Henri the VIIIth proud and impressive not to say intimidating. Painted when the king was already advanced in age, he is represented as a young man with the chest out, well shaped calves and an over puffed fly!

Nowadays, nobody pays attention to this little thing on pants: the fly! This tiny piece of pants seems to have no interest at all, but has in fact lived quite an odyssey.

Everything begins at the end of the XIVth century, during one of the many revolutions of western masculine outfit. Before, men and women used to wear long and loose tunics called dresses. Men’s dresses were then split in the front to display the legs covered in hoses, and became totally out fashioned when breeches were invented. This last piece of clothing was created to hold the hoses like a suspender for stockings. Those two parts were united in a kind of puffy pants with a large opening in between the legs. That is why a third piece was invented to covering gentlemen’s manhood: the fly. Hoses, breeches and flies were interchangeable and united with a lace system.

The new fashion stipulated that those clothes were to be worn very tight, and men wasted no time to bring attention on their manhood. Flies were puffed with wool or iron shells, then ornate with pearls and embroidered. Some even used their flies as pockets: money, gloves, letters, fruits let to mature or dried meat used to join men’s personal jewels with no restriction.

Flies began to flatten around the 1580’s, when fashion came out of breath. The use of these items has been totally replaced during the XVIIth century by the bridge: two ranks of buttonholes on each side of breeches top, creating in front a lid of tissue.

As this portrait testifies, nobody was alike Henri the VIIIth in the matter of flies: his whole life he stood fiercely and fly puffed out proudly. 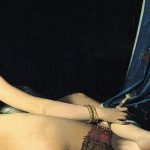