The perfect woman is a snake

This month, we wanted to put forward on one of the Louvre museum masterpieces, The Great Odalisque painted by Ingres. Produced during the 1810’s, this painting is far from just being a female nude set in an dreamed Orient. It reflects actually a theoretical artistic controversy.

Since the Renaissance, various quarrels divided the artistic world in Western Europe. Artists were fighting about proportions, perspectives, techniques, gender hierarchy and aesthetic ideal… One of the most disputed quarrels was about color and drawing. Artists were trying to precise the very nature of painting: either it was an action from the mind, where drawing was more important with a quest for perfection; or it was an illusion from the senses, influenced by colors that were imitating reality. In the beginning of the 19th century, this question divided two great artists: Ingres on the drawing side and Delacroix on the color side.

Like many other artists at this time, Ingres was fascinated by the Middle East and Orientalism. But, in contrast with Delacroix, he never moved there, he just fantasized about it. For him, Middle East was only inhabited by sensual women, naked and languished all day long, secretive and mysterious, living in luxury harems. Ingres built his picture around a serie of curved lines, setting his figure in a complex position both exposed and modest, all just to reveal his own vision of the Middle East’s sensuality. In order to accentuate the curve of her back in a subtle and imperceptible way, the artist took the decision to add three vertebras to his model. This trick allowed him to introduce his personal vision of Orient: a sort of dream like a land slightly distorted, strange and familiar at the same time.

This young woman perfectly personifies the Oriental beauty ideal according to Ingres, with her cold and hypnotic eyes, with her contorted body exposing and hiding her shapes at the same time. The perfect woman, in his view, is like a snake: fascinating, exotic, sensual and dangerous… 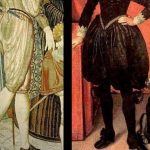 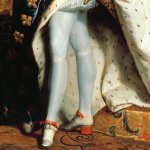